What a great summer picnic! This event on Dover Down field, the 6th since the Chaucer Fields Picnic Society was formed,  and the 4th in collaboration with the Abbots Mill Project and Canterbury Greenpeace, was one of the best yet. All the usual ingredients were to be found. Blessed with pretty good weather, we had a strong turnout of people of all ages and backgrounds, including people and families from the local and university communities (some familiar faces, some new friends); the sharing of food, drink, serious conversation and gossip; playing and unstructured fun for children, including tree climbing, hide and seek and exploration of all the nooks and crannies of this wonderful unspoilt fields, woods and hedgerow setting; and entertainment from various musicians on the Greenpeace stage, including Richard Navarro, Jack Barrack Cade, Pete Hicks and Luke Dodson. Pictures from the picnic are interspersed here. 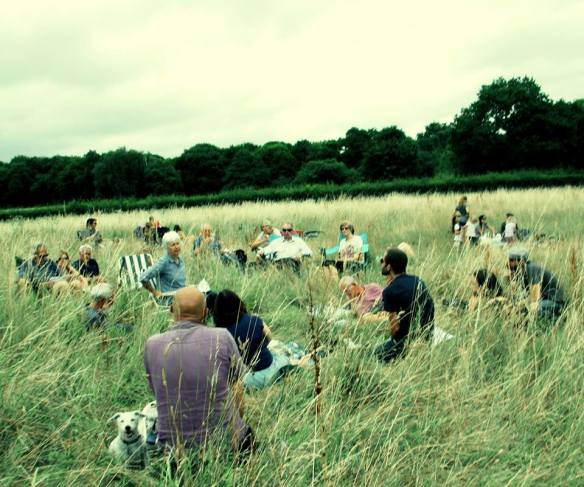 A further element in the picnic this year was a semi-structured discussion of the latest iteration of the Masterplan information, led by Dr William Rowlandson, the staff union (University and College Union)’s green representative. The discussion was shaped by the perspectives of people of different ages, with varying experiences of the fields, and from different roles and backgrounds in the local and university communities. Despite this striking diversity, it affirmed the value to all of the unspoilt fields and generated a clear consensus that buildings of any form on the fields should be strictly forbidden for the full duration of the pending Masterplan (to 2031) and indeed  beyond. 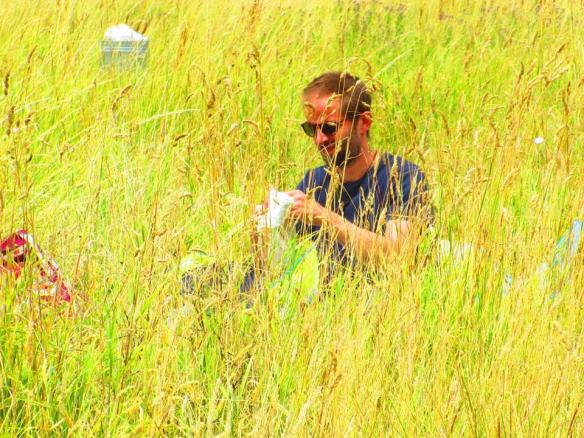 This conclusion was  hardly surprising, since the prevalence of this view in both communities has now been well documented on innumerable occasions in the University’s own consultation processes (most recently, see the last CFPS Blog summary of the 2016 Conceptual Masterplan consultation report ); as part of  Kent County Council and Canterbury City Council led processes (the village green application review and the planning/green gap proposals  respectively); and of course, the university staff and student affirmative votes on the issue.

However, it was still good to see this view underlined collectively with such clarity and force; to hear it being contextualised with interesting  ideas about how to enhance the green sustainability dimensions of other parts of the campus; and and to see it conjoined with the coming together of minds on what to look out for in the months ahead as the Masterplan process moves forward. There was shared tactical sentiment that it was crucial that both local and university communities watched, very closely, the University authorities’ words and actions as they unfold in the months ahead. Even if the process would likely be drawn out, complex and convoluted, it was agreed this vigilance was needed to ensure that any language used by the University authorities in seeking to portray itself as supportive of the host community and its own staff and students on this matter was not mere empty rhetoric or cynical spin.

What was needed, it was agreed, was meaningful, firm and unambiguous commitment to ensure the protection of the unspoilt Southern Slopes (“Parklands”) landscape for the full duration of the Masterplan period (to 2031, crucially including the period after 2025, when the current University Estates Plan expires). If the fuzzy, equivocal buzzwords and vague  evocations (“enhancement”, “green assets”, “pavilions” etc) used in the 2016 Conceptual Master Plan were retained and carried through  in the stages ahead without proper clarification, it was recognised this sort of elastic and unfocussed language  could potentially provide dangerous discursive cover for damaging development. Structures and buildings on the Southern Slopes could potentially be smuggled through in the years ahead, claiming such ‘development’ involved ‘landscape enhancement’ or the strengthening of ‘green assets’,  an outcome against which all there where wholly committed.

Although not publicised at the time, it also emerged at the picnic that the University Corporate Communications department had convened, to take place a few days later, an expert invite-only  “spatial workshop” to discuss “place making”, “planning and environment”, “landscape and biodiversity” and “transport and movement”. A useful report of the event has now been made available, and can be seen here. This should be welcomed, and as the appendices show, it  turned out to involve a sensible balance of people with relevant authority, knowledge and experience –  with one exception.  Other than a handful of Estates staff,  a core constituency of the university community – its own academic and nonacademic staff, most obviously as represented through the UCU – had not even been invited. At the picnic and afterwards,  bewilderment was expressed on this glaring omission!

Luckily, the discussion at the picnic helped partially address this, because Richard Norman, one of the picnic attendees,  had been invited to the “spatial workshop” in his capacity as a residents’ association representative. Richard was positioned to draw on the wider set of views – from residents and staff alike – that he had encountered at the UCU-convened picnic discussion, in articulating a position at the “spatial workshop”. (There has subsequently been a belated attempt to address this issue by addressing an invite to university staff to attend a separate “focus group” to discuss the meeting report (this seems likely to happen in september, but the date has not yet been made known).. Once again, such a “focus group” is helpful, but it was nevertheless a shame that the opportunity was missed to formally include staff representation at the July event, and thus integrate their input more systematically into the process.)

What do we learn from the “Spatial Workshop” about expert and representative opinion regarding the appropriate place of the Southern Slopes/”Parklands” in the Master Plan? In fact, the report further adds to the massive stockpile of evidence concerning the strength of sentiment in favour of retaining these fields, woods and hedgerows as unspoilt space.  Two of the four groups which were organised at the event directly discussed this place. First,  Group 4, whose members included representatives of CCC, KCC, and local voluntary and amenity groups,  are reported as agreeing that “Parklands should be retained and not built upon” (op cit, p. 8).  Second, Group 1, whose members included Ruth Wilkinson, the incoming President of Kent Union (the students’ union), CCC and parish council leaders, and Richard Norman (residents’ association) are reported as agreeing that “Parklands should be retained” (op cit, p. 6). However, it is important here to understand that the latter, vaguer phrase in relation to Group 1 cannot and should not be interpreted as expressing a different view from that expressed by Group 4: Richard was able to confirm that this Group were also unambiguously committed to the rejection of any idea of placing buildings or associated structures on the Southern Slopes too. 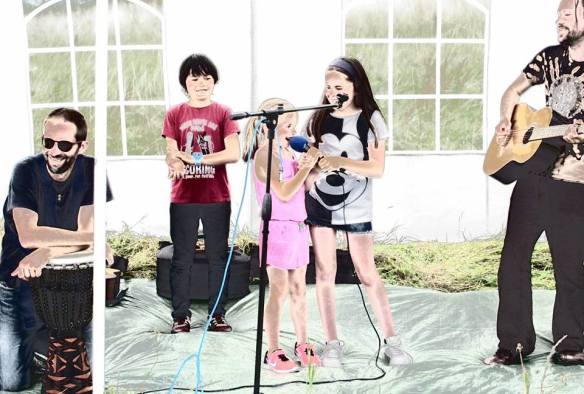 Recognising Shared Heritage: Towards a place on the agenda?

Finally, although not linking the matter directly to the Southern Slopes/”Parklands”, it is encouraging to see that elsewhere in the Worshop report, as part of the agenda for the  “Emerging Landscape and Biodiversity Strategy” two of the expert Groups (3 and  4) emphasised the need to look for opportunities to “reflect the historical landscape” (op cit, pp. 11 – 12). There is obvious and direct relevance here for Chaucer Fields and the Southern Slopes, because we know the extent to which the unspoilt landscape here reflects a particularly rich heritage, including its association with the wonderful Beverley Farmhouse; its enduring salience as a shared open viewing point of the cityscape (from long before the university existed); the legacy of field structures,  meadows and orchards (including apple trees still in place to the east); and  the existence on the land of part of the original, ancient “salt way” from the Cathedral to Whitstable (to the west). In Blogs written five years ago (see History Really Matters and Midsummer Notes: 6 Easy Ways to enhance Chaucer Fields as unspoilt Space) the potential not only to remember these things passively, but to bring them actively back to life by rescuscitating relevant language, including the original place names –  whilst also making new connections evoking local history – was proposed. Let’s hope that the existence of an explicit heritage strand in the “Emerging Landscape and Biodiversity Strategy” could help make some of these ideas real in the future.